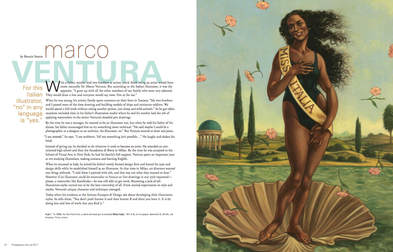 WITH A FATHER, MOTHER AND TWO BROTHERS AS ARTISTS, you’d think being an artist would have come naturally for Marco Ventura. But according to the Italian illustrator, it was the opposite. “I grew up with all the other members of my family who were very talented. They would draw a line and everyone would say, ‘wow.’ Not so for me.”

When he was young, his artistic family spent summers on their farm in Tuscany. “My two brothers and I passed most of the time drawing and building models of ships and miniature soldiers. We would spend a full week without seeing another person, just sheep and wild animals.” As he got older, vacations included time in his father’s illustration studio where he and his mother had the job of applying watercolors to the senior Ventura’s detailed pen drawings.

By the time he was a teenager, he wanted to be an illustrator too, but when he told his father of his dream, his father encouraged him to try something more technical. “He said maybe I could be a photographer or a designer or an architect. An illustrator, no.” But Ventura wanted to draw and paint.

“I am testardo,” he says. “I am stubborn. Tell me something isn't possible...” He laughs and shakes his head.

Instead of giving up, he decided to do whatever it took to become an artist. He attended an arts-oriented high school and then the Accademia di Brera in Milan. By the time he was accepted to the School of Visual Arts in New York, he had his family’s full support. Ventura spent an important year at SVA studying illustration, making contacts and learning English.

When he returned to Italy, he joined his father’s newly formed design firm and honed his type and design skills while he established himself as an illustrator. At that time in Milan, art directors wanted one thing: airbrush. “I told them I painted with oils, and that was not what they wanted to hear.” However if an illustrator could do watercolor or linocut or line drawings in any style requested—please, a watercolor like Kandinsky—he was still able to get work. Becoming a jack-of-all-illustration-styles turned out to be the best internship of all. From myriad experiments in style and media, Ventura’s unique character and technique emerged.

Today when his students at the Istituto Europeo di Design ask about developing their illustration styles, he tells them, “You don’t push button A and then button B and there you have it. It is by doing lots and lots of work that you find it.”

Ventura describes how he works: “First I do lots of rough sketches, then I refine the sketches. Once I am happy with that, I do it again in color. I apply the finished sketch to the paper as an underpainting. Then I paint in oil. Finally I finish with glazes.”

He works in this detailed and meticulous method on paper and wood panels, and occasionally canvas. “In this way I manage to bring the rapt aura of old paintings into my representation—all done in the style and manner of my masterly predecessors.” Except that the crackled effect on a Renaissance painting is caused by age, whereas Ventura creates the crackled surfaces in his illustrations by hand with the tiniest brushes. At this point in our Skype interview, he holds up 5/0 and 10/0 brushes, some of the finest an artist can use; the hairs are barely visible.

Ventura’s tenacity has paid off for him artistically and professionally. While he has always worked from Italy, his assignments have come largely from the United States and Europe, which wasn’t easy before the era of electronic delivery and communications. With his never-say-never attitude and a reputation for delivering great work across borders and oceans, he’s garnered a loyal international clientele that includes Time, GQ, Forbes, Esquire, the New York Times Book Review, Der Spiegel, Rolling Stone, Playboy and the New York Times Magazine. Publishing assignments have come from American, German and Italian publishers such as Simon and Schuster, Harper Collins, Rizzoli, Mondadori and Deutscher Taschenbuch Verlag, plus corporate work from La Rinascente, Swatch, Ericson, Strathmore Paper and The Body Shop.

Ventura considers himself international. “I am very proud of being Italian, but I don’t consider myself an Italian illustrator.” Ironically the rolling hills of his childhood in Tuscany often find their way into his work, a nod to the likes of Renaissance master Piero della Francesca who was born near the family farm.

“I like doing the Italian-style landscapes with hills and cypress trees, the halos, the cracks and ribbons with type whenever I can. I love them and I think clients expect to see them as one of the peculiar characteristics of my work. Also I find it visually intriguing to represent modern and contemporary themes dipped in traditional Renaissance-style technique.”

German art director Stefan Kiefer of Der Spiegel magazine says about Ventura’s technique, “It really makes a difference if an illustrator asked to create a Medieval-inspired artwork uses brushes, paints and methods from that era. Marco has an Italian sense of enriching any illustration with his very distinct old style, which he applies even when we ask him to paint a high-powered business executive surrounded by his latest gizmos and gadgets.”

But Ventura’s work is as much about his concepts as his technique. He enjoys the creative process of working with art directors. “I think it’s important to listen, to see what the client has to say. When I was younger, I didn’t listen so much.” He laughs at his early reluctance to try new ideas.

Kiefer says, “Developing an illustration with Marco is pure fun; he never says no. And even if he might have a slightly different approach to a problem, he really knows how to convince the art director, softly, with kind words, how to make it plausible.”

Kenneth Smith, former art director of Time magazine, talks about working with Ventura: “Marco is great at conceptualizing an idea and his technique is masterful. He is a maestro.” He too hired Ventura for more than his style. “I liked using artists who have an understanding of the news and its background. Whenever we had an Italian politician or story, Marco was always my first choice.”

He assigned Ventura a cover about a controversial event in Italy. “The winner of the Miss Italy contest was a dark-skinned woman originally from the Caribbean whose father was Italian and mother was of African decent. This caused a big uproar in Italy. Marco did a fantastic Birth of Venus using a likeness of the winner. Not only was it a beautiful painting, but it also illustrated the news story perfectly.”

In Ventura’s studio in Milan, drawings, photographs of family and friends, ephemera and prints of Renaissance masterpieces cover the walls and on a shelf in the middle of the collage sits his collection of bike water bottles.
A lifelong cyclist, he uses the sport as a metaphor. “Drawing and painting have always been a source of pleasure for me, but also toil. I like to compare myself with a cyclist who reaches the summit pedaling hard and sweating his way to the top. The joy and satisfaction of reaching the top, of completing a picture, more than repays the sacrifice and the many hours of work, making me feel ready for the next climb.”

Once again, the key to Ventura’s work is hard work. Steven Charny, Rolling Stone magazine's art director, assigned Ventura an illustration on a subject about which he had little information. “The only thing we had was that Jack Johnson had done a lot of local and global charity work, so I came up with the idea of him as a surfing saint. So of course, I thought of Marco right away, with his cracked-plaster fresco style. We went through many sketches to get his clothing right—we went from full saint robes to street clothes until we settled on him in his board shorts wearing a flower necklace. Marco came up with the idea of him surfing through the clouds (from a Johnson lyric) that really was a stroke of genius.”

Although changes in communication have made life easier for an artist working in oils, Ventura still navigates time constraints. In a recent assignment for a special edition of Corriere della Sera, the newspaper’s art director wanted eleven paintings in three weeks. “There was no time to do all the portraits in oil. So I came up with the idea to do the cover in color and the others in finished pencil.” Always flexible, but insisting he would only do his best, he came up with a perfect solution. Person of the Year Steve Jobs is in color on the cover.

Work has recently come from other Italian clients. He completed a series of stamps for the Vatican State and will be illustrating a series for the other country within Italy, tiny San Marino. Neither is technically Italy, but both are close enough to be called home.

Ventura finished our interview with an interesting nugget: All three Ventura brothers—Andrea, Paolo and Marco—have had their work on the cover of the New York Times Book Review. Maybe he had to work harder to get there, but Marco Ventura has surely captured his spot on the family podium.