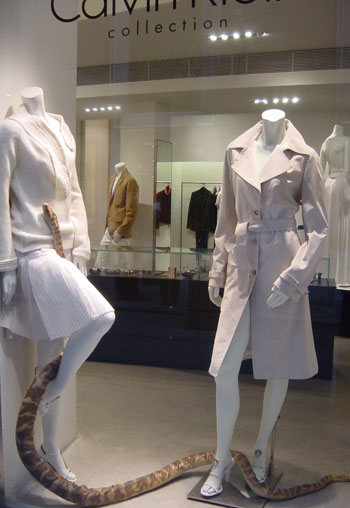 ​I TIPTOED UP THE GRAY-CARPETED STAIRS of the Gucci store in Rome. A single sweater folded with precision lay on a counter and another three lay perfectly forbidden on a shelf below. The only other shoppers were a Japanese teenager with no apparent budget and a model who I’d seen leave her boyfriend in his Ferrari outside. I felt out of my league and tiptoed back down the stairs.

But I felt no better on the street. Perfectly dressed Italians rushed past me, confident in their matching shoes and handbags, in the cut of their skirts, in the height of their heels. No one looked like me.

At home, my friends called me petite, but in Rome, I felt like a tank, a sack of potatoes—a middle-aged frump. But how could I not shop for clothes in Italy? That seemed as grave a sin as not sampling the country’s pasta, pecorino or prosciuto.

And so I made another attempt at scaling the wall of Italian fashion, this time attaching myself to a group of window-shopping tourists. When they entered the Giorgio Armani boutique around the corner from Gucci, I followed along. On the top floor, I saw an Italian matron standing on a raised round platform before a bank of floor-to-ceiling mirrors. Three male tailors, pins lodged between their pursed lips, swarmed the woman like bees around a hive. One took tucks at the hem of her navy slacks, another one adjusted the waist of her champagne-colored blouse, and the eldest counseled the woman while pinning the seams of her tweed jacket. Her soft figure revealed a life well lived and her comments—too tight, too high, smaller—revealed she knew what she was doing.

I left the store empty-handed but I took with me the lesson that I didn’t have to be young and thin and beautiful to shop in Italy, I just had to know what I was doing.

But I didn’t know if buying a sweater in Gucci was like buying apples in the vegetable market. Was I supposed to ask the salesperson to choose a sweater from the rack the way you’re supposed to ask the fruttevendolo to choose your five red apples? Would the clerks in Armani swat at me like the elderly vegetables sellers who thought I didn’t know about the “no-help-yourself” rule? I intended to find out.

Shoes were an easy place to start: the clerks retrieved the boxes from the back and I knew the words for “size” and “too tight.” Winter sales were easy too: shoppers are expected to help themselves to the bins of half-priced blouses and jeans. But sooner or later, I had to actually go into a store and ask to try something on.

One courageous day, I entered a store whose windows displayed a rainbow of silk blouses. When I asked to try on the honey-colored one, the saleswoman brought me the blouse—and three suits in styles suitable for my mother. Unknowingly I’d chosen an age-inappropriate store. Horrified, I told the woman that I’d return another time, and I fled.

On my next attempts, I sought the safety of Rome’s Sunday crowds in centro where I could shop with anonymity. For weeks, I strolled the streets between Piazza del Popolo and the Spanish Steps, learning what stores I liked and what stores I could afford. I discovered one small shop where I could hone my shopping skills.

“I’m looking for a turquoise blouse,” I said.

“Turquoise?” the shopkeeper asked, prodding me to be more specific.

“Yes, I want a turquoise like the color of the water off Portofino,” I responded. The shopkeeper, Signor Carlo, had taken pity on my American slowness with fashion and over many visits had patiently instructed me about silk, bound buttonholes, and where the best Italian shoes are made.

One day after visiting Signor Carlo, I wedged myself into a tiny, crowded shop down the street from his store—and spotted the trench coat of my dreams. As soon as I saw its details and my fingers touched its fabric, I knew I had to have it. But the store was a Sunday chaos of shoppers and I wasn’t up to the challenge. I pushed the coat back between other garments and hoped it would be there when I returned the next day.

Monday afternoon I did return and, instead of the sales girls from Sunday, this rainy day an elegant middle-aged man dressed in a dove-gray suit stood behind the counter. “Buon giorno,” we greeted. I walked slowly down the rack, holding my breath. My coat was still there.

“Posso (may I)?” I asked. I slipped off my old coat and slipped on the new one. The man was at my side helping me thread the cloth belt through the loops. He snugged it tight, pulled at the back seam, and asked me to turn around.

“You need a smaller size,” he said. Sadly he didn’t have the coat in my size. But he insisted that I try on three skirts that would be perfect for me and sent me to the dressing rooms. As I changed into the first one, I could see through the curtains that another woman had emerged from her changing room and stood in front of the mirrors. The shopkeeper was on her like a magnet, tugging at her waistband and agreeing with her that the skirt made her stomach look poofy.

She asked for a thinner waistband, inquired about a shorter jacket, and wondered if he had something with pleats that opened up just so. Through the crack in the curtains, I tracked his search for the woman’s requests. I also watched as his large hands flattened the seams over her shoulders and pulled at her cuffs. When he suggested that pleated pants would be more flattering, I cringed. I’d never get used to a man telling me that my waist was too big.

I charged out of my dressing room, “Thank you, but the skirts aren’t for me.”

Very good, wonderful, thank you, good bye, I was out of the store. I walked home and then it hit me. I’d been so unnerved by the idea of the shopkeeper poking and prodding me, I’d almost missed the lesson unfolding before me. The man had run around his store searching for exactly the right thing for his customer—but not simply to make a sale. He’d been doing the dance of respect for someone who knew what she was doing. The longer the woman had deliberated, the more particular she’d been, the more respect he’d given her—the same respect I’d received when I’d asked at the cheese shop if their mozzarella di bufala came from the dairy Vannulo.

I continued to gather shopping lessons, returning often to test my progress under the watchful eye of Signor Carlo, until one day I found myself in a boutique on Via del Corso. The sales staff, a young man and woman, welcomed me and fell in behind me like shadows following the sun.

I pointed to a slim-cut suit and asked to try it on. Of course, try on whatever you like. We’ll start a dressing room for you. And so the dance began. A little bigger, a little shorter, do you have this in silk? Two hours later, I left the store with the most stylishly cut pants and jacket, a camisole, a crinkled silk blouse—and the coat I’d fallen in love with weeks before, in the correct size.

I was waiting at the bus stop near my hotel, wearing my new coat. A woman standing next to me smiled and moved a step closer. “I love your coat,” she said, openly looking me over.
“Thank you. Isn’t it wonderful?” I said. “I got it at a small shop on Via del Corso.” I described the location.

“Tribù?” she asked, and moved even closer. In the time it took me to recall the store’s name, she’d reached for my collar and turned it over to reveal the label.

“Bellissima,” she said, and patted my collar back in place. Her approving  “beautiful” seemed like a Pope’s benediction, her lingering grasp of my coat’s fabric a sure sign that I finally knew what I was doing.