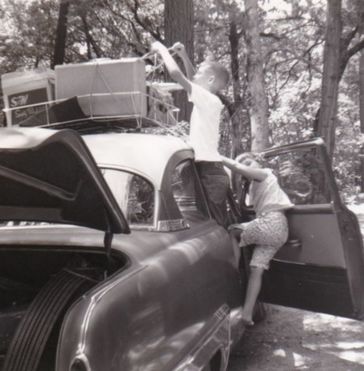 ​WHEN THE HELICOPTER SET DOWN at the tiny Princeville airport on Kauai, its engine’s idling whine covered up my scream, “No more camping, ever.” I jumped down to the tarmac, pulled my waterlogged pack after me, and set out to find a hotel.

You’d think that I’d have given up camping sooner.

I grew up with a father for whom camping and comfort never shared the same zip code. He had shipped home (stolen) his Navy-issued sleeping bags, tents, binoculars, air mattresses, and cooking equipment at the end of World War II. By the time my brother and I were born, even though lightweight tents and air mattresses that actually held air had been invented, my father stubbornly held on to his Prehistoric gear—and insisted we use it on our annual camping trips.

But packing the car was only half the vacation fun. The real joy of our trips began when we arrived at our destination (usually after dark).

My brother and I were given orders to extract the tent duffel bag that traveled wedged behind the front car seats (we traveled with our legs crossed because the camping equipment occupied the space usually reserved for legs). With the duffel on the ground, our next job was pulling the hundred-pound tent from the bag. Once freed, we unrolled it and unfolded it, one side and then the next, until its entire 12 x 12-foot real estate lay flat in the dirt. A stake at each corner to hold it down in case of wind (as if wind could lift it off the ground) and four more for the ropes that would ultimately hold the tent upright. Then and only then I was sent into the mildewy darkness of the still-deflated tent. My mission, to find the grommeted hole for the main mast and shove the pointed timber into the hole. I’d holler OK and my dad would crawl in after me to make the final effort to raise our outdoor home.

But we weren’t done yet. The family then sat on the cold, lumpy tent floor and blew into our air mattresses until we saw stars. Of course, air escaped from the crude rubber rafts as soon as we attempted to screw the caps over the valves.

And so it went year after year—damp nights in the leaky tent, bacon-less breakfasts courtesy of the fickle stove, and tense battles with Dad when we complained.

By the time I was a teenager, I refused to camp with my father anymore. But instead of giving away my sleeping bag, I traded my father’s brand of adventure for that of my high school friend Denise, another expert in uncomfortable camping. Maybe it was like coming from a family of drunks, becoming one yourself before finally throwing off the familial legacy.

Denise dragged me up and down the peaks of the Sierra Nevada and along the Pacific Crest Trail. We made our own dehydrated gruel, packed a single Sierra Club cup and spoon each as our mess kit, and carried no stove. But Denise, the survivalist, did allow us a tent—a tube tent, a large, orange garbage bag that was open at both ends. We would tie one end of a rope to a tree, pass it through the tube, tie the other end to a second tree, and then attach the garbage bag to the rope with clothespins. Invented for emergencies, it was our regular home in the high country. Which worked fine until a trip through the Sangre de Cristo Mountains in New Mexico when we got lost above timberline and it began to snow.

Denise and I survived the night in New Mexico without getting frostbite, but it was our last trip together. That should have been it with me and camping—but remarkably, another year passed until I finally hit bottom by myself on that trip to Kauai. I had hiked to the Kalalau Valley on the island’s north shore along a slippery and nerve-challenging trail with a cliff on one side and a drop off to the sea on the other. When I arrived at the beach, I perched on a boulder to gather my nerves before making camp. Momentarily distracted by the tiny crabs scuttling back and forth in the surf, I looked up to see a monstrous wave driving straight at me. I flopped onto my belly and grabbed the rock before the wave slammed over me.

That was the moment when I said, that’s it, no more.

I rescued my pack from the surf and suffered through the night in a wet sleeping bag. The next morning I hitched a ride out of the valley in the helicopter that had dropped off guests from a luxury hotel for a beachside picnic.

Now whenever friends try to lure me back outside with the assurance that camping has changed and that modern equipment makes a weekend in the mountains as comfortable as a stay at the Plaza Hotel, I say, “No thanks. No way. Never.”

But the lessons I learned camping stay with me. I always carry a canteen (water bottle) and I always find my campsite (hotel) before dark. But there’s more. When I recently stood beneath Michelangelo’s frescoes in the Sistine Chapel in Rome, the memory of standing with my father in a stalactite-filled cavern one summer vacation came rushing back. The long-forgotten awe of exploring ghost towns and crossing mountain passes on our afternoon hikes returned as God breathed life into his son Adam on the ceiling overhead. My father filled me with his curiosity and he is the reason I travel the world today. He’s also the reason I insist on a hotel room each night.