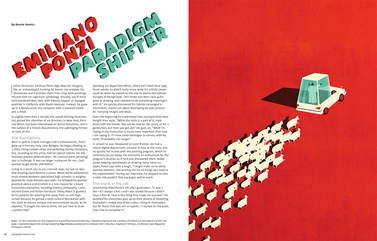 ​ITALIAN ILLUSTRATOR Emiliano Ponzi digs deep for imagery, like an archaeologist hunting for bones. He analyzes his discoveries and translates them into crisp, bold paintings infused with his signature symbology. Visually, you’d think he’d wandered New York with Edward Hopper or lounged poolside in California with David Hockney. Instead, he grew up in a Renaissance city complete with a towered castle and a moat.

In slightly more than a decade, the award-winning illustrator has gained the attention of art directors in New York, Paris and Milan, has been interviewed on Italian television, and is the subject of a French documentary. His upbringing hinted at none of this.

Born in 1978 to a bank manager and a schoolteacher, Ponzi grew up in Ferrara, Italy, near Bologna. He began drawing as a child, inking cartoon strips and perfecting Disney characters, but, according to the artist, had no special talents. He did, however, possess determination. “At a certain point, [drawing] was a challenge; it was no longer a pleasure for me. I just wanted to get better and better.”

Living in a small city in pre-Internet days, he had no idea that drawing could become a career. When Italian adolescents must choose between specialized high schools—a weighty decision for most thirteen-year-olds—he followed his parents’ practical advice and enrolled in a liceo classico for a broad humanities education, including history, philosophy, Latin, ancient Greek and Italian literature. Today Ponzi is grateful to his parents for steering him away from an arts high school because he gained a solid cultural foundation with the skills to reason, analyze and communicate results. As he explains, “It taught me how to think, not just how to draw a perfect tree.”

Speaking via Skype from Milan, where he’s lived since 1997, Ponzi admits he didn’t really know what his artistic career could be when he moved to the city to attend the Istituto Europeo di Design (IED). “All I knew was that I was quite good at drawing and I wanted to do something meaningful with it.” He quickly discovered his talents converged in illustration, and he set about developing his own process for marrying images and ideas.

From the beginning, he understood that concepts hold more weight than style. “While the style is a part of it, style deals with the trends. You can be cool for ten years, or for a generation, but then you get old.” He goes on, “What I’m saying in my illustration is much more important than how I am saying it. If I have some messages to convey with my work, I’ll probably last longer.”

In school, he was introduced to Corel Painter. IED had a robust digital department, unusual in Italy at the time, and he quickly fell in love with the painting program, which he continues to use today. He maintains an enthusiasm for the program’s brushes as if he’d just discovered them. Asked about keeping sketchbooks or drawing initial ideas on paper, Ponzi says with a laugh, “I might make some really sketchy sketches. Like writing the list of things you need at the supermarket.” During our interview, he stopped to take a note and couldn’t find any paper within reach.

The Monk in His Cell

Uncertainty filled Ponzi’s life after graduation. “It was a bet—it’s always a bet—and I was scared because I didn’t have a Plan B. That is the thing that made me succeed.” He watched his classmates give up on their dreams of becoming illustrators—today only three make a living in illustration, but for Ponzi that was not an option. “I started on the path, and I had to complete it.”

For the next four years, he holed up in his Milan apartment and applied himself to his illustration, doing little else, rarely going out. “I know that sounds a little creepy, but I decided to do that. Illustration was my priority.”

His 2011 monograph, titled 10×10, gathers the work created in the ten square meters of his “cell” during his first ten years. The images are accompanied by e-mail snippets from clients and friends that range from heartbreaking to hilarious and tell the story of those years. In the introduction, art director Nicholas Blechman praises Ponzi: “Like all great illustrators, he is versatile. He can switch easily from topic to topic, from drawing the financial meltdown one day to drawing the crisis in education the next.” A second monograph with introductions by illustrator Brad Holland and Pentagram designer DJ Stout is in the works with the publisher of 3×3 magazine.

Ponzi emerged from his monastic period with a portfolio that attracted advertising and editorial work for smaller Italian companies, then larger ones, and finally a New York agent and work in the United States. He has earned a glittery collection of awards—golds, silvers and bronzes—from competitions including the ADC Annual Awards, the ADC Young Guns Award, American Illustration, Associazione Autori di Immagini, Communication Arts, Print magazine, the Society of Illustrators and 3×3 magazine’s Illustration Annual. His clients include the New York Times, The New Yorker, the Los Angeles Times, Newsweek, the Washington Post, Businessweek, The Atlantic Monthly and Sports Illustrated, and in Europe, Elle, Le Monde and La Repubblica, and publishers Feltrinelli, Arnoldo Mondadori Editore and Giulio Einaudi Editore. Today, Ponzi works at home, in a larger, sunnier room with a balcony overlooking Milan’s lemon-yellow trams passing below. With its white walls and carefully curated books and objects, it still has a cloistered feel.

Like the objects in his studio, nothing in Ponzi’s illustrations arrives by accident. Each element passes through the rigorous creative method he distilled while in art school. “I start playing with words that I find in the article or in the text to see if I can move two words into different visual environments.” To explain, he references an image of Hitler he created to illustrate the meaning of the lyrics in musician Valerio Millefoglie’s song “Torsolo di Mela” (Apple Core).
In the monochromatic illustration, the negative and positive shapes of a half-eaten apple create the unmistakable image of Hitler’s face. Four apple seeds draw the Fuhrer’s signature mustache. The translation in Ponzi-speak: Hitler = Evil and Apple = Evil (in Latin, the two are the same word). The two symbols become a third: Hitler is evil to the core (apple seeds contain cyanide).

His messages in other images don’t always appear as quickly. In a piece about rising sea levels for Le Monde, he places three Polynesian dancers in front of swaying palm trees. The idyllic scene and calm colors lull the eye until we see that the women are up to their waists in water, depicted by a nearly transparent wash of white. Ponzi challenges his viewers to find the “punch line,” the element that is out of place.

Color drives the symbols in Ponzi’s high-impact messages. Three or four colors make up each palette, and complementary colors—like red against pale green—draw the eye to the out-of-place element. In an edition of Italian graphics magazine Un Sedicesimo, Ponzi illustrates the ninth circle of hell from Dante’s Inferno using only red, black and white. In the scene, two prostitutes negotiate with a client next to his car. It’s an ordinary scene until you look inside the car and see a priest’s white collar. Classic Ponzi. He uses the same creative process and sophisticated color play whether he is illustrating an editorial piece, an animation or an installation.

When Ponzi talks about how he developed his visual style, he cites the neuroscience behind how kids learn to walk. Simply put, “I see what you do. I learn by watching you.” In his early years, he absorbed everything he could from those he calls great masters, such as Brad Holland, Lorenzo Mattotti, Alex Katz, David Hockney and Edward Hopper. “Then, of course, you have to create a different path because those other paths are already occupied. I can’t chase Brad Holland because he has his own street. I have to build mine.”

American designer John Maeda is another of Ponzi’s heroes. “He is a very smart person and an intelligent designer. He says reality is complex, so we have to create a synthetic version of reality. My efforts are also trying to take elements out without having any diminuzione, so that it doesn’t feel empty, so you have what you need to understand.” Comparing his earlier work to his more recent, it’s apparent that Ponzi continues to simplify his images as his communication skills mature.

Ponzi’s symbols communicate across language and culture. Italian publisher Feltrinelli enlisted him to illustrate the book covers of German-born American author Charles Bukowski. The artist immersed himself in the author’s work and in 1970s California, amassing images of the cars, bars and hairstyles of the era. The great synthesizer went to work distilling symbolic imagery for each title. In Bukowski’s Compagno di Sbronze (English title: Erections, Ejaculations, Exhibitions and General Tales of Ordinary Madness), red nipples of three passed-out figures convey the sexual context of the scene. The covers garnered many awards, including a Gold Cube from the Art Directors Club. Now Ponzi feels the pressure of finishing the other titles in such a successful series and jokes about finding the “wizard inside” who created the first ones.

Ponzi slides effortlessly from Bukowski’s gritty Los Angeles to a recent assignment in Milan where he and five other artists were invited to define their home city beyond the clichés of fashion and catwalks in a show at the Triennale di Milano. To communicate the city’s modernity, he superimposed its two iconic skyscrapers. For the city’s complexity, he created a visual twist with the metro map. And for culture, he filled the stage at La Scala with dancers. One wears the city’s duomo, or cathedral, as a hat.

Perhaps future work will include more animation or installation projects, or even something to do with furniture and fashion. But Ponzi does have some specific projects in mind. “There are a few things I really want to do before I die.” He smiles and mentions doing a New Yorker cover (he’s done interior illustrations) or a project for Apple. “But mostly I’d like to last a long time, like Brad Holland,” a sentiment he’s had since the beginning of his career.

The driven artist may be tired at the end of a project, but unlike many of his countrymen who are known for enjoying their long vacations, he gets bored after a few days at the beach and wants to get back to his studio and his “children.”