​The Italian illustrator’s complex work plays with the opposing forces of beauty and ugliness. 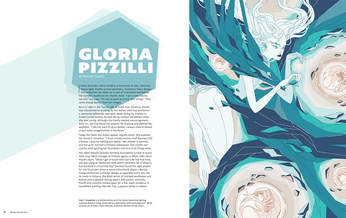 ​ITALIAN ILLUSTRATOR Gloria Pizzilli is a mixmaster at play. Darkness teases light, fluidity pushes geometry, innocence hides danger. She unleashes her ideas on a cast of characters and blames the complex results on her chaotic mind. “I am a very chaotic woman,” she says, “I’m not so good at doing calm things.” That same energy bursts from her images.

Born in 1983 in the Tuscan city of Prato near Florence, Pizzilli was introduced to drawing by her father, who had worked as a cartoonist before she was born. Never losing his interest in fumetti (comic books), he took her to cartoon exhibitions when she was young, although she hardly needed encouragement. Early on, she had found her passion for drawing and defined her aesthetic. “I did not want to draw Barbie. I always tried to distort or put some exaggerations in the faces.”

Today the faces she draws appear vaguely Asian. She explains her family’s influence: “I have mixed cousins—half German, half Chinese. I love my melting pot family.” Her mother is German, and her aunt married a Chinese Indonesian. She credits her cousins with igniting her fascination and love of all things Asian.

Her client Daniela Sanziani, formerly illustrations curator at WIRED Italia, now talent manager at Visionar agency in Milan, talks about Pizzilli’s work. “When I got in touch with Gloria for the first time, she was using an illustration style which reminded me of Ukiyo-e, but revisited in a futuristic key.” Sanziani found the right project for the illustrator when a WIRED Italia article about a female manga enthusiast surfaced. Manga, or Japanese comic art, has its roots in Ukiyo-e, the block prints of stylized courtesans and Kabuki actors popular during Japan’s Edo period. Ironically, Pizzilli only recently visited Japan for a five-week residency in woodblock printing near Mt. Fuji, a popular Ukiyo-e subject.

When asked about other influences, Pizzilli shakes her head and laughs. “I have my father to thank for this. I grew up differently from other artists, not drawing with them. I just made up my own style.” In Italy, fourteen-years-olds must select a subject-focused high school that sets their course for university and their career. Families agonize over the decision, and the art high school is often not a parent’s first pick. Pizzilli’s mother, a recognized expert in the very geometric art of chiacchierino, or tatting, had passed her mathematical mind onto her daughter. Pizzilli loved geometry and math, so her father encouraged her to attend the liceo scientifico, or science high school. They’d met renowned Italian Disney artist Giovan Battista Carpi at a comics festival and he’d given them advice about Pizzilli’s education. “Culture is the first thing. If she really wants to draw, she will draw on her own.”

The young illustrator did draw. Three days a week after high school classes, she took the train alone to Florence’s Scuola Internazionale di Comics. However, teenage angst gradually set in, and her dislike of polynomials and quadratics grew. Her malaise seeped into her drawings as well, and she stopped.

For seven years, she did not pick up a drawing pen. During that time, she fell in love, studied design voraciously at ISIA Design Firenze and had two children. Then one day, her long dormant talent stood up and demanded attention. “I didn’t just want to only be feeding and caring for my children. And that’s when I decided to try to do illustration again.”

Her first commercial success was a brochure for La Scala, Milan’s famous opera house, in which she illustrated Puccini’s Turandot for a family-friendly performance. Another kid-oriented piece about Peppino, or Guiseppe Verdi, followed.

Today her client list includes The New Yorker, the New York Times, the Boston Globe, GQ USA, WIRED Italia, La Stampa, L’Espresso, Feltrinelli, Mondadori, Eli, Éditions du Seuil and Éditions Milan, where her projects range from editorial to books to fine art prints. Her first New Yorker job came by way of an e-mail she sent to them that included links to her work. She only recently signed with the agency Illozoo.

She also collaborates with Gusto Robusto, a limited editions publisher who prints and exhibits a select group of vector artists. One of the exhibit sponsors, Italian lighting company Masiero, commissioned her to create a special gift print for their clients. In Crystalline, a beautiful woman with dark lips and flowing locks spins glowing orbs into creatures of light. But is it a woman? A human? Almost hidden on the left side of the painting, her feet are those of an animal. A classic Pizzilli mash-up. Animals—especially big cats and reptiles—are often her favorite messengers for surprise. Gusto Robusto shot a fast motion video of her drawing this piece with digital pen and tablet, which can be viewed on Vimeo.

While she’s never made peace with pixels, she’s at home with Adobe Illustrator. “I feel very good with vectors because I love geometry. I am comfortable with shapes and grids. In Illustrator, I use a freehand gesture, and then I can put limits and calculate.”

She reserves hand drawing for personal work. Her characters, both human and animal, painted with Japanese calligraphy brushes dipped in India ink and watercolor, fill her sketchbooks. “I hate pencils!” She stops to laugh at her outburst, and continues, “I don’t like to erase. In Illustrator, I can go back, but when I draw by hand, I make mistakes—they are all there.”

Initially too shy to promote her hand drawings to clients (although she may in the future), she has conquered her nerves about drawing at live events. At Vinitaly, a wine and spirits festival, she painted a mural for beer company Birrificio Angelo Poretti incorporating hops into the flowing hair of an angel (a reference to the company’s name) before an enthusiastic crowd.
​
Italy abounds in festivals, not just for wine and food, but also for music and art. One festival promoting contemporary Italian culture, Italianism, included Pizzilli in its show 50x50x50—50 artists creating works of art in 50x50 centimeters. She explains the inspiration for her piece: “The theme was 50, so I thought: the 1950s. The idea of an American 1950s movie poster came to mind, then one for a science fiction movie.” Entitled Alien Attack, a female astronaut with long eyelashes and red lips fights a monster whose threatening tentacles are reflected in the geometric precision of her space helmet. A damsel in distress—but not exactly. Her heroines—with their tousled locks, intense eyes and pouty lips—can be as easily innocent as menacing. She often blurs not only the line between human and animal, but also male and female, always playing with the opposing forces of bellezza (beauty) and bruttezza (ugliness), an idea she discovered as a child.