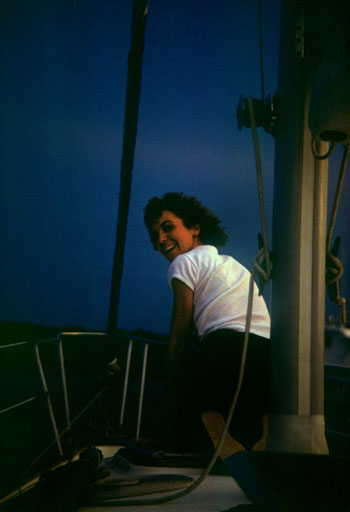 ​ONCE UPON A TIME, a girl was born with the ocean in her eyes. While other little girls floated off to sleep on the black velvet of night, this little girl drifted away on swells of shimmering turquoise.

When she grew up, she became an artist and tried to make sea pictures of her own, but they never matched what she saw when she closed her eyes. And with eyes open, she was never safe: Idyllic coves jumped off magazine covers in waiting rooms and boiling arctic waves flew off the pages of fellow commuters’ books. Tahiti. Palau. Anguilla. Sometimes words were even more dangerous than images. She was never free from her thirst for turquoise.

She took a job designing a sailing magazine in an office overlooking a marina. She averted her eyes, careful not to gaze too long at the pictures while she worked. In the end, the ads were her downfall. A sloop lay at anchor on a glassy jade bay above the incantation, “Bareboat Adventure.”

She had to ask, “What’s this mean?” pointing to the headline.

“You rent a sailboat without a skipper, bare. Big boats in the best water around the world,” her boss explained.

Oceans, seas, bights, and crossings, all she needed was a crew. Her grumpy husband knew how to sail—it was the only reason she kept him. Her father had sailed the seas as a young man and still knew how to chart a course by the stars. Her mother would come along, and her girlfriends—they always followed her on adventures—all she had to do was ask.

She asked. A month later her crew assembled on the dock at Marsh Harbor. The low-lying scrub islands of the Bahamas barely held their heads above water. But the water—it was what she’d waited for since birth.

But the girl-with-the-ocean-in-her-eyes could not yet succumb. She was responsible for the girlfriends, and the parents, and fifty feet of luxury yacht. Before she left home, she’d arranged for a captain the first few days of the voyage—just to be sure. She had imagined a tanned, round fellow with a grey beard and a blue cap.

When the crew stepped aboard the Lucky 7, they were introduced to Adonis: Michael was twenty-something, sun-scorched with corkscrew-curly hair falling around a golden face. When he uttered his first British-tinged Bahamian words, the water-girl knew they were in trouble.

The voyage started innocently enough. Michael showed everyone the boat, explained the rigging, and talked about navigating by the stars.

Then he turned his attention to the girlfriends. He showed them how to crank the winches, raise the main sail, and drop anchor. He stood behind them and wrapped his golden arms around their waists as he demonstrated. He flirted with everyone, even the mother. When his work was done, he draped himself leopard-like on the stern, letting his now-trained crew sail the boat. He had come from generations of boat builders and these waters were his home. When he felt the softest kiss of the keel on the sand, he leapt to the wheel, gunned the engine, and freed the boat from the bottom before the grumpy husband could say, “I think we’re…”

The girl-with-the-ocean-inside was annoyed by the commotion. She had stretched herself over the side of the boat and was raking the turquoise water with her fingers and tracing the outlines of starfish glued across the sandy white bottom. Sandy.

"You slept with Michael?” the once-upon-a-time girl gasped when the girlfriend Sandy told her. Then she remembered.

“I’m sleeping on deck,” the girlfriend Sandy had said the second night. The damp air had hung inky and close, and Michael who had grown up on the sea had slept on deck, too. But the ocean-girl never guessed the two would dare to hook up while the second girlfriend, the grumpy husband and the parents slept below.

Wow. When she planned the voyage, she never imagined the girlfriends might cut into the magic.

The ocean-girl saved the picture she took that morning: the girlfriend Sandy stood on deck in her red-and-white striped dress with Hope Town lighthouse similarly clad behind her. They had just dropped off Michael. He disappeared down the dock taking with him the spell he had cast on them all.

“Sandy is immature,” whispered the mother, taking a turn at spell wrecking.

Not to be overshadowed, the grumpy husband was grumping. But nothing could cloud the ocean-girl’s dream. She took over as captain, steering away from Hope Town, driving the boat up and down pillows of waves, pushing her chariot on toward Treasure Cay.

That afternoon they anchored off a reef rumored to hold a shipwreck. The girl-with-the-ocean-in-her-eyes, the grumpy husband, and the girlfriends climbed into the dinghy and steered toward the sunken treasure but a terrific wind whipped the water into an aqua frappuccino, obscuring the view below.

They pounded back through the foam toward the boat. The parents were nowhere in sight. The night before, while the crew danced in the sand to a steel drum band below palms scratching the sky, the parents had disappeared. When the crew returned to the boat, the mother was sitting outside in her underwear, the father below. “It’s so hot tonight,” the mother had volunteered.

Had they done it again? The ocean-girl hated her role as boatparent, keeping track of who was naked and who was not.

But every day, she sailed and snorkeled and swam. At dusk, she dove off the boat and moved through the water with manta rays until the jade underworld faded to black.

The final day at sea, the Lucky Seven anchored in Vixen Bay. The three girlfriends set out to explore the water, leaving the grumpy husband, now lobster-boy, to hide from the sun. At the bottom of the deep channel, angelfish, eels, and snapper were bigger than they’d ever seen and the brain coral were the size of armchairs.

The girl-with-the-sea-in-her-eyes floated. If she held her head just so, sun flickered off swells in the top half of her facemask, while schools of grouper swam in aqua below.

When the sun finally sank low, she guided the sun-burned grumpy husband out to the channel hoping to find the fish again. As they reached the center he tugged on her flippers, “I don’t think we should be out here.” He saw how deep it was. She was about to suggest that he was an unadventurous wimp when she saw the barracuda—five feet long with a mouthful of picket-fence teeth. Instinctively the lobster-boy and the ocean-girl folded themselves in half and put their kicking legs—and the extra length of their fins—out in front between them and the fish. They circled backwards as the barracuda circumnavigated them.

Scared—she’d never been scared in the water—the ocean-girl put the grumpy husband between her and the fish. Why not? They continued paddling backwards toward shore, rotating to keep the fish in view. The fish followed them to water shallow enough to stand. They touched sand and flapped madly toward safety like two wet clowns, too frightened to stop and release their long fins.

Lucky 7’s crew heard their screams. The almost-misfortune lightened the mood for a moment but the boat had become too small for the parents, the girlfriends and the grumpy husband. They spent their final night in a hotel. But not before the girlfriend Sandy had to pack and unpack and fold and refold everything in her gigantic bag one more time, the other girlfriend had to make everyone search for her contact lens one more time, and the grumpy husband had to feel ignored one last time. The once-upon-a-time-girl didn’t care. The view over Long Bay from the hotel’s veranda was everything she ever hoped to see. The rum cocktail she sipped was everything she ever wanted to taste. She was exactly where she wanted to be.

The next morning the girl-with-the-ocean-in-her-eyes awoke with a fever. She didn’t remember the small plane taking off with the parents. She barely remembered Miami. The grumpy husband had dressed in white polyester like a used-car salesman from Ohio. He breezed through Customs while the girlfriends were delayed, the agents going through every corner of their bags. Finally on the plane, the husband whispered to the girlfriends, “They thought you were my mules.” The girl-with-the-ocean-in-her-eyes soothed the girlfriends’ anger but she never soothed her own.

Time passed. The girlfriends drifted away, the parents sadly went to their places in heaven, and the ocean girl traveled alone.

“Fishermen setting out at dawn…ancient fort overlooking the sea… a cliff facing the vast turquoise ocean.”

She tried to look away, but the billboard was there, right next to them on the freeway. She didn’t say a word. Her cheerful new husband drove them home, parked the car, and disappeared into the den to retrieve his passport.